‘Bold and the Beautiful’ Spoilers: Old Feelings Never Die – Furious Brooke Accuses Taylor Of Being a Vulture, Trying To Use Hope’s Grief Against Her To Steal Liam For Steam Redux With Steffy 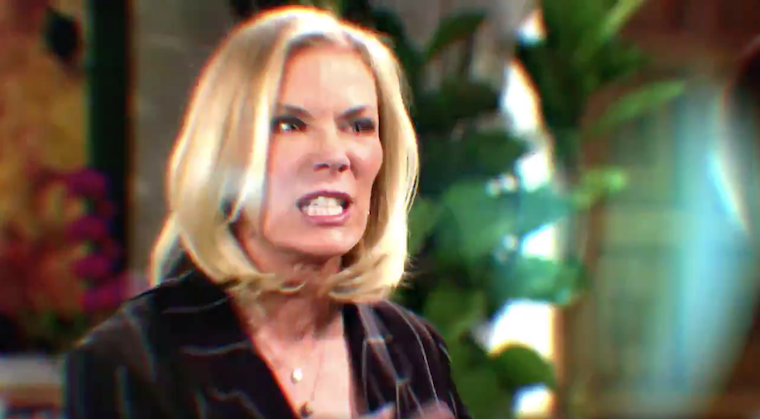 ‘Bold and the Beautiful’ spoilers find that Ridge intervenes before Brooke and Taylor’s war with words escalates to something else; Wyatt shares words of wisdom and asks different questions to a troubled Liam.

‘Bold and the Beautiful’ Spoilers: Old Feelings Never Die – Furious Brooke Accuses Taylor Of Being a Vulture, Trying To Use Hope’s Grief Against Her To Steal Liam For Steam Redux With Steffy

At the Main house – Brooke Logan (Katherine Kelly Lang) and Taylor Hayes (Hunter Tylo) are talking about Hope Logan (Annika Noelle) and Liam Spencer (Scott Clifton). Brooke’s very angry because she thinks Taylor would like to see Hope with anybody else other than Liam. She also tells Taylor that if she goes spewing that insanity to Hope she will have to deal with her. Taylor asks Brooke if she’s threatening her, but Brooke says she’s just defending herself and her family. She came into her house, kissed her husband and now her and Steffy are waiting like vultures for Hope and Liam’s marriage fault apart.

If you take a gamble, you could risk it all. ???? AND don’t mess with another woman’s man! See what happens this week on #BoldandBeautiful. pic.twitter.com/0jKbfY8pvf

Ridge suddenly walks in and he couldn’t believe that on the same day they were supposed to commemorate Caroline they started fighting. Taylor tells Ridge that if he’s by Brooke’s side, who’s not allowing her to come and see her son, she will take Thomas Forrester (Mathew Atkinson) and his son, Douglas, and will go away. Brooke tells Ridge that she saw Taylor kissing him and telling him that she loved him. Thomas and Douglas walk in at that point. Brooke tells him how sorry she is and she excuse herself for not being at the memorial.

Taylor, Thomas and Douglas left for the kitchen and Brooke and Ridge are left alone. They are talking about her meetings in Paris and about Thomas’ plans, if he has any. Brooke’s sorry she let Taylor get under her skin. Ridge says she’s like that because she had a difficult life. Everything will be ok if she doesn’t intervene between Hope and Liam’s marriage. Taylor is with Thomas in the kitchen. He asks his mother to go with Steffy Forrester (Jacqueline MacInnes Wood), his sister, to help with the kids in Paris. Steffy needs her there more than he needs her here. He will be ok with his father and all the others here. Douglas seems to be ok, Taylor remarks, to which Thomas says that it’s because of Hope. She knows how to talk to him when he came from the garden and he thought he saw Caroline. Douglas also asked her to be his mother. Thomas is speechless on how Hope knew to talk to Douglas. 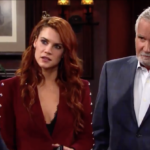 ‘Bold and the Beautiful’ Spoilers Wednesday, March 27 Update: The Battle For Sally Rages On, Ridge Makes Her an Offer She Can’t Refuse To Remain At Forrester Creations – Thorne’s Vacated Position!

At Liam’s house – Hope, Thomas and Douglas are together. Douglas asks her if she doesn’t want to be his mother. Hope promises him that she will do her best for him, exactly like his mother used to do. Douglas leaves with Thomas to go eat something at the Main house. He asks Hope if she’ll be there when he comes back. Liam just came back and Hope’s arranging baby’s things to give some of them to charity and some to Douglas. There’s no way she will keep them for another pregnancy. She tells Liam that Douglas asked her to be his mommy. Hope says that what happened with Douglas helped her open her heart to him. They start hugging each other.

At Bill’s secondary office – Liam and Wyatt are talking about Liam’s wish to be a father. He doesn’t know what kind of father he can be because when he was small he didn’t have a father. Wyatt assures him that he’s going be a dedicated and loving father, the only problem is that Hope doesn’t wants to be a mother anymore. Wyatt proposed to Liam to adopt a child but it’s too soon, Liam says. It’s never too soon to start living in Wyatt’s opinion. Wyatt thinks that Liam wants to leave, but he’s afraid to go home. The only thing that Hope doesn’t want for the moment is another child.

‘Bold and the Beautiful’ Spoilers: “Can You Be My Mommy?” – A Motherless Child’s Desperate Plea Hits the Right Chords

CBS ‘The Bold and the Beautiful’ Spoilers: Sally Spectra’s…

CBS ‘The Bold and the Beautiful’ Spoilers: Sally’s Pillow Pregnancy –…

CBS ‘The Bold and the Beautiful’ Spoilers: Dr. Penny Escobar Might Even…