‘Bold and the Beautiful’ Spoilers: Flo Ends Up Being Hope’s Hero and Sally’s Nightmare

‘Bold and the Beautiful’ spoilers tease that a guilt-ridden Flo is very close to telling Liam and Hope the truth about Baby Phoebe. As a matter of fact, she’s been pressuring Dr. Reese Buckingham and his daughter Zoe to come clean about the truth as well. Unfortunately, they are worried that if they do, everyone will end up behind bars. But for Flo, it doesn’t matter. She wants to turn her wrongs into rights. Here’s what you need to know.

‘Bold and the Beautiful’ Spoilers: Will Flo End Up Being Hope’s Hero?

In recent weeks, Flo has grown close with Wyatt, Sally, Liam and Hope. She was even invited to Wyatt’s impromptu dinner party, where everyone was surprised to discover that she is supposedly Baby Phoebe’s biological mother. What’s more, Flo is also Wyatt’s ex-girlfriend from his high school years and lots of teasing has been going on recently that the two could have a fling together. Remains to be seen if Wyatt will be tempted by his high-school girlfriend now that she’s matured and grown up to a beautiful woman (Sally’s words).

True love can’t be denied ????, and true lies will be exposed ????. Don’t miss it this week on #BoldandBeautiful! pic.twitter.com/sMlrH6S7hd

Of course, Flo isn’t the one who technically took Baby Beth away from Hope and gave it away to Steffy for adoption. Sure, she played a role by pretending to be the birth mother, but Flo believes that this entire scheme is all Reese’s fault. He’s the one who desperately needed the money in order to pay off his gambling debts.

Seeing how much pain Hope is in, she was already very close in telling her the truth about her baby. Flo can’t live with the guilt of knowing that Hope is in pain over a daughter that she thinks she lost. Instead, that daughter has actually been in her arms several times since Baby Beth’s supposed death.

The Bold and the Beautiful spoilers tease that Flo might end up being the hero in this whole mess. That is, if she confesses the truth. Flo has even said that the longer she waits, the more damage there will be. Of course, fans will have to tune in to find out what will happen next! 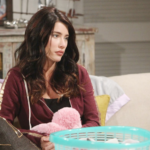 ‘Bold and the Beautiful’ Spoilers: Steffy Packs Up and Takes Off To Paris, Brings Kelly and Phoebe With Her – Gets Out of Dodge Just As Flo Is About To Spill Truth Beans!

CBS ‘The Bold and the Beautiful’ Spoilers: What Happened To Katrina…