Dad on a mission

After learning in a previous episode Dante Falconeri (Dominic Zamprogna) has gone rogue and the WSB won’t help for fear of creating an international incident, Sonny has decided to act. He calls his friend, Brick (Stephen A. Smith), to work out a little journey to Turkey. Carly Corinthos (Laura Wright) isn’t thrilled with the idea, but she agrees that it’s time to bring Dante home.

The trip Shiloh (Coby Ryan McLaughlin) had in mind was to a small town with a tower he’d found once. He’d crashed there when in need once, and waking up to the sunrise there allegedly put his whole life into perspective. He wants Sam to stay there with him for the night to experience it herself. He swears it’s a life-changer. There may be a bit of a snag in that plan, but we’ll get to it later…

Not-Kevin Collins is ready to celebrate his engagement to Ava Jerome (Maura West), but Carly (who pointedly mentions the whole still-married thing) puts a momentary damper on their celebration. Ava’s suddenly coming back down to earth and thinks they’re getting a little ahead of themselves. Not-Kevin assures her they have every right and reason to celebrate and asks her to wait while he takes care of a loose end.

He heads over to Ferncliff, where Laura and the real Kevin are still locked up. Laura and the real Kevin get a little worked up by the sharp object Not-Kevin is holding, but he’s not there to kill them. Nope. He just wants Laura to sign on the dotted line and free him to marry Ava. Laura isn’t going to go along with it at first but is persuaded to do so. After he leaves, they get a little overdramatic about this “divorce”. The real Kevin even mentions that he wants to marry her again once this is over. Um… still married, people. We’re pretty sure that the one demanding the papers not being who he says he is (not to mention Laura signing under duress) pretty much invalidates any so-called divorce.

Jordan's plan to lure Ryan out of hiding will require more of Franco. Will he be willing to scorch even more earth in Port Charles?
An all-new #GH STARTS NOW on ABC! @Bri_Nic_Henry #GH55 pic.twitter.com/18uWJukIBO

Later Not-Kevin happily shows off the signed papers to Ava, claiming they were waiting in his office. He explains away taking off before by “having a hunch” they’d be there.

Related to Not-Kevin, Jordan Ashford (Briana Nicole Henry) is still with Franco Baldwin (Roger Howarth) at Ferncliff. She’s given him a burner phone and strict instructions that he’s to set up a tell-all interview where he gives all kinds of details of his crimes. She especially wants him to go on about his own artistry and genius. Franco, reasonably, wants to warn Elizabeth before going through with it. Jordan’s all “not so fast”, but Franco places the call anyway. Too bad for him, the phone can only dial out to her. He also reasonably worries about his safety, should he antagonize the killer. She has no worries here, but he questions if the killer may be someone who could have access to Ferncliff. And once again, someone is being smarter than the cops here.

Okay, okay…. We have to give props to Curtis Ashford (Donnell Turner) and Drew Cain (Billy Miller), who both think something is off with Franco’s confession. 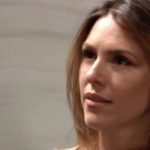 An Epidemic in Port Charles

Meanwhile, Anna Devane (Finola Hughes) and Robert Scorpio (Tristan Rogers) are taking lead on the questioning of Arthur Cabot (Time Winters). He reveals his experiment’s end game was a kinder, gentler interrogation method—steal the person in question’s memories and give them to someone else. Anna is still reeling from having been involved without remembering. This is important later. Arthur reveals there were more people involved, although Anna was among the first.

Later on, we see a couple of new victims of the virus. Jason Morgan (Steve Burton) suddenly falls down the stairs Sam and Shiloh had taken to the top of the tower Shiloh wanted her to see, and Drew is driving when his sight goes. Remember when we said we were concerned for Franco in the case something happened to Jordan? Well, she just happens to be in the path of Drew’s car when at the wrong time.