We’ve got sad news for Days of Our Lives fans. There are new reports that state actor Morgan Woodward has passed away. He was best known for his role as Phillip Colville, a character that he played back in 1987 and 1988. Here’s what we know.

According to reports, Woodward passed away peacefully in his home in California on February 21. He was 93. The Fielder House Museum in Arlington, Texas was the first to report the news to The Hollywood Reporter.

Woodward was born Thomas Morgan Woodward on September 26, 1925 in Fort Worth, Texas. Before he began his career in Hollywood, he was hugely influenced in western and cowboy movies. Many of his favorite big screen stars including legends such as Buck Jones, Tom Tyler, and Hoot Gibson.

In the latest #DAYS, Ciara learns the truth about who set the fire that almost killed her. Now she wants to know why. Watch Days of our Lives, weekdays on NBC. https://t.co/ZsCmioRrzb pic.twitter.com/BmWMBd78YD

In addition to his work on daytime television, Woodward had a very extensive list of movie and television credits in the entertainment industry. Some of them included The X-Files, the immensely popular television series Dallas, Murder, She Wrote, Matlock, Renegade, Blacke’s Magic and so much more. The last time he was seen on the small screen was back in 1997 for a small role he has in a series called Millennium.

Our condolences go out to Morgan Woodward’s entire family during this very difficult time. His reps have not made any additional comments at this time. It’s without a doubt that many of the actor’s co-stars and the crew of Days of Our Lives, both old and new, will remember him for his incredible on-screen talent. 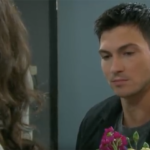 Days of Our Lives airs weekdays on the NBC network. Check your local listings for times. In the meantime, let us know what you think by leaving us a line with your thoughts in our comments section below. And as always, come back to Daily Soap Dish for all the latest news, updates and spoilers on Days of Our Lives and all of your favorite daytime television shows right here!

Young and The Restless Spoilers: Mia And Phyllis Are In The Hot Seat