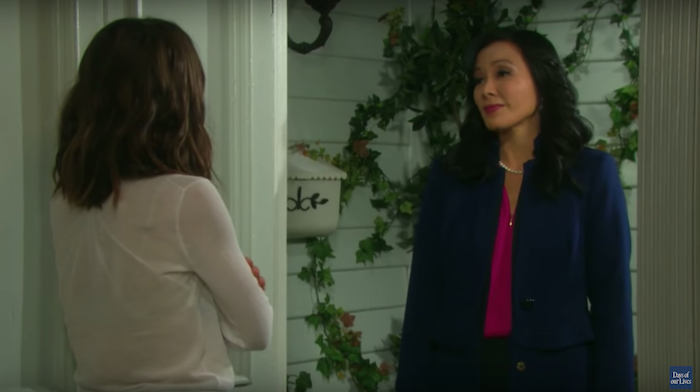 ‘Days of Our Lives’ Spoilers: Melinda Trask Is Back and Up To No Good – Julie in Between Abigail and Chad

‘Days of Our Lives’ spoilers relate that Julie Williams (Susan Seaforth Hayes) insists on Abigail Deveraux (Kate Mansi) and Chad DiMera’s (Billy Flynn) union. Elsewhere in Salem, Melinda Trask (Laura Kai Chen) is back and is up to no good. Things are getting real in Salem, and if you missed all the Days of Our Lives spoilers, get ready to catch up on some highlights with your Days of Our Lives recap.

‘Days of Our Lives’ Spoilers: Melinda Trask Is Back and Up To No Good – Pushy, pushy, pushy…

It seems that Julie Williams (Susan Seaforth Hayes) is not giving up on the idea that Abigail Deveraux (Kate Mansi) and Chad DiMera (Billy Flynn) should be together. She cancels an entire night of bookings at Doug’s Place to allow Chad to throw a romantic dinner for Abigail. This, by the way, gets Chloe Lane (Nadia Bjorlin) upset, and we can’t be bothered to care since she goes super bitch later on.

Anyway, Abigail gets the whole spiel from Julie, including how it should be easy to give him a chance if she let Gabi Hernandez (Camila Banus) off the hook. She even goes for the whole “I just want you to be as happy as Doug and I” routine, which Abigail calls out as emotional blackmail. Julie agrees. Anyway, Abigail eventually relents after telling Julie that it’s not going to make a difference. I guess we’ll find out.

‘Days of Our Lives’ Spoilers: Melinda Trask In Between Gabi and Abigail, Tries To Use Chad’s Kidnapping As Bait

It seems that’s to be the theme of this episode, as two plots intersect thanks to Melinda Trask (Laura Kai Chen). She stops by to try begging Abigail to reconsider dropping the charges against Gabi. She insists a crime was committed, and Gabi has to pay. Abigail thinks they’ve hurt each other enough.

.@MrRobertScott and @victoriakonefal are heating up the #DAYS podcast! ???? Listen on @ApplePodcasts and Google Podcasts. pic.twitter.com/qZ1dYLlDRk

When Melinda decides to try using Chad’s kidnapping of Abigail as bait (bad move, lady), Abigail points out her testimony will also be needed for that and she’s not putting her kids’ father in jail. Melinda finally shows her real motivations by going off on Abigail for getting her to put an innocent person behind bars before and how it’s almost impossible for her to convict. Abigail gives no you-know-whats and insists that Melinda leave.

‘Days of Our Lives’ Spoilers: Melinda Was the One Calling Hayley

Later, we find out that Melinda has been the one calling Hayley Chen (Thia Megia), driving her to that suicide attempt JJ Deveraux (Casey Moss) saved her from. While Hayley is now being forced into counseling to keep her job, she continues to tell JJ that she is fine. He keeps pushing to help, and she thinks he’s got bad motives.

He insists not, and that it’s just about paying things forward. When he’s called away for a work thing, he asks Hayley to hang there so they can talk. She isn’t there when he returns, though, because she’s meeting Melinda at the park. Looks like Hayley is being forced to help with something that she’s not happy about.

‘Days of Our Lives’ Spoilers: No More Ben Weston

That’s the conclusion Ben (Robert Scott Wilson) came to today after being questioned about this deal with Claire Brady (Olivia Rose Keegan) by Ciara Brady (Victoria Konefal). They argue about what he did, but Ben’s not fooled. He knows this all comes down to his work with Stefan DiMera (Tyler Christopher) and the Gabi thing.

He blunders the whole thing by saying that he’s now longer working for Stefan, as Stefan’s in jail now. Not only that, but Chad is now CEO and his first act was to fire Ben. What he doesn’t mention off the bat, and should have, is that he had actually gone there to quit because Ciara’s more important.

This little lapse creates a bigger fight, and Ben basically says that it’s over because no one in this town is ever going to think anything but the worst, and that now includes her. Ciara clearly wasn’t expecting that, and tries to stop him. This doesn’t do any good, because he still leaves. Their bit ends with him sitting outside thinking about how he’d told her he wouldn’t give up.

‘Days of Our Lives’ Spoilers: Other ‘DOOL’ Spoilers

Sidenote: Chloe’s already bad mood gets worse after she learns that Holly was brought over to Eric Brady’s (Greg Vaughan) without her knowing. She marches right over (not having to work after all, thanks to that booking we mentioned earlier) and gives Eric an earful. Sarah Horton (Linsey Godfrey) steps in and informs Chloe it was her idea and she is the kid’s aunt, after all. This seems to make no difference, and Eric has had it. He says he’s reached a decision about custody.

‘General Hospital’ Spoilers: Ryan Gets Intel From Mac – Jasam Lays It All Out To Shiloh – Lulu Getting In Even Deeper – Anna’s Situation Gets Tragic